With our white, and I mean white, skin we were told we’d be pretty popular in South Asia. Not because we’re super cool, but because we’re foreigners. We heard stories about nationals flocking to take pictures with foreigners and talk to them in the streets and markets, and we experienced a little bit of that. Nathan actually had a guy intentionally pose in front of him in the supermarket while his wife snapped the picture. But in our city, our skin isn’t attracting those “instant friends” we had kind of hoped for. You see, our city is really big in the IT industry and so foreigners come and go all the time, no big deal. I guess if I’m honest though I kind of wanted to be a “big deal”. It’s hard to just strike up conversations with people on the street if you can’t speak their language, and if you’re no one special and the person already has friends, what do they need you for? So we had been asking the Father for friends, or people of peace, or someone who could show us the ropes here in our city. Now South Asia as a whole is a country of night owls, so if you’re like me and your best time of day is 10 AM, that can be hard. But after having a friend over for dinner one night, Nathan and I managed to be in the lobby of our apartment at 9:45 PM, and that’s when it happened. We met our neighbors. We were beginning to think our complex was a ghost town because we literally hadn’t seen anyone. But at night, it was a whole different ballgame. The family lives right above us, they’re native to Bangalore, AND they speak English. We’ve known this family for 2 weeks and we’ve been invited into their home for lunch, exchanged desserts, and been very surprised at the night calls they’ve made to our apartment while we were vegging out on the couch. We asked the Father for relationships that could go deep quickly and that has definitely been answered, although on a level I wasn’t quite prepared for. When we first met this family I was asked how much we paid for our apartment. On their first visit to our house, our kitchen was scrutinized and we were asked why our dishes were left out on the drying rack instead of put away( this was a sincere question, not an insult, and it has actually spurred me on to conquer my disgust of doing dishes). But I know we’d really hit it off when they popped in one night to chat and then asked if we could keep their chicken, mutton, and masala in our refrigerator until they got one of their own. “Do you want me to bring it to you tomorrow morning?” I asked. To which the daughter replied, “No, I’ll come get it when we need it.” You may think this odd, but we’re just grateful for friends who feel comfortable enough to ask us to store their cold cuts.  And it’s just another evidence that our Father hears us when we call out to Him, and He is faithful. I’m sure there will be more stories to come, and we love this family already.

I’ve been driving since I was fifteen (I know, I know–SC starts young), so coming to South Asia was a huge difference for us because we gave up driving for merely riding. Our choice transportation so far has been autos. Now when you hear the word auto you might start picturing an automobile in your mind. Erase that picture very quickly, and replace it with a golf cart. Now imagine a golf cart with only one wheel in the front, and I think you’ve got a decent idea. The word auto itself can be a bit ironic for me because auto makes me think of being autonomous, self-sufficient, free-bee. In actuality autos are hit and miss for us. Sometimes they’re everywhere and sometimes there are none in sight. Sometimes they stop for us, and sometimes they stop and then just say no and drive off. We take the same route every day for language class, so it only took us two days to realize what our driver should be charging us for his services. They have meters in their vehicle that charge by distance, but we learned not to ask for the meter initially…if you ask, they assume you don’t know what you’re doing and proceed to tell you “no me

ter–meter is broken” (which always baffles me if I can see the numbers working perfectly fine…they must think our vision is also affected by our language barrier.) Sometimes the men take one look at our skin, or listen to us try to impersonate their accents, and immediately charge us 3 times what the meter price is. If i’m tired, hungry, or have an upset stomach and want to go home, I don’t argue–I just understand that I’m a foreigner and I pay extra. But sometimes I just get mad. Like the time I actually knew how to get home (for the first time!) and my auto driver intentionally took me through a neighborhood I didn’t know so that he could run up the meter. But then you have the auto drivers who we like to call “Uncles” because they’re older, quiet, and fair. They let us practice our meager 2 phrases of language with them and smile in good humor when we mess up a word or don’t know any other responses. Today our auto driver made us pay 30 rupees more than what we know the meter should be, and then almost wrecked us because his tire blew out in the middle of the street (I have to admit… is a thing here in South Asia that a lot of people believe/practice that I do not agree with because it basically says what goes around comes around, and I know that I received grace when I didn’t deserve it, BUT in that moment I had the brief thought that his tire blew out because he overcharged us). But as I watched him timidly get out and look at us with embarrassment 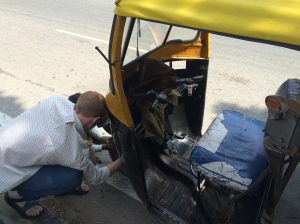 , I had compassion on him. He quickly began changing the tire, with Nathan’s help, and I realized he’s just a hard working man who’s trying to make a living, and he doesn’t know the Truth. I’m not saying that makes it okay to overcharge us (although he didn’t trick or cheat us per-say..we did agree to the price before hand), but I am learning that there are times to stand up for myself and times when I can show others the grace I’ve been shown. I’m also learning that #whitegirlproblems are real..and they have nothing to do with my rhythm or beat (which with all the Bollywood here, will hopefully improve). So while life here sometimes does drive me crazy (literally, and figuratively depending on who I ride with), it’s definitely an adventure that I’m excited to share with you.